26th February 2021. The session is done. With some of Manchester’s finest string players, all 6 arrangements are recorded and going to the artists for mixing.

Coming soon! Emerging Manchester. The string arrangements are done, the scores are prepped, the players are booked, the session is on Friday 26th February at The Wood Rooms, 6 songs by unsigned Manchester artists are getting the full Realstrings treatment. More info at www.realstrings.wordpress.com/emergingmanchester

All in one place

It’s long been a problem for us folks dabbling with social media and publishing online – where the hell do you do it!  I’ve resisted using any sort of aggregator that puts the same post on all the platforms.  I know it can be frustrating opening up Twitter for a fix, only to open up Instagram and getting exactly the same fix, as 1 post is sent to both platforms.

I’m a musician and a punter.  With my musician head on, I’m concerned about income from streaming services, with my punter head on, I like streaming! I tried Apple Music for a while, found the interface a bit clunky and then it stopped working on my desktop machine (I think I needed to do an OS updated or something I resented at that moment). So I moved to Spotify and it does what I want; I can listen to music easily at any time and the interface doesn’t piss me off.

We all hope we can leave some sort of legacy – personally and professionally – and with the recent death of a close friend who was a mastering engineer who created a playlist of tracks he’d worked on, I decided to do the same.

Being a musician. It’s not a proper job, obviously.  It’s something you do for fun isn’t it?  But, amazingly, musicians actually expect to get paid when their music is broadcast on TV or radio.  Here’s how it works, roughly speaking, for a commercially released song.

You compose a piece of music, a bunch of musicians record it, a record label releases it so TV and radio stations will broadcast it.  That short, innocuous sentence is laden with legal rights.  And, frankly, mind boggling complexity.

The people  who composed the music own the copyright in the notes and lyrics.  They usually share that copyright with a publisher (who rarely actually publishes anything like sheet music). The publisher earns his money by making sure the music gets broadcast on tv and radio and does the stuff related to that.  Hopefully.

The musicians who play the music own rights as performers.

In order to keep it simple (ha ha) all these people expecting dosh when music is broadcast use 2 main companies to do the admin – PRS (Performing Rights Society) and PPL (Phonographic Performance Limited).

So, show me the money.  If a broadcaster had to negotiate payments with everyone separately the world would spontaneously combust, so they do the deal with the 2 companies that represent all those music types – PRS and PPL.  A broadcaster pays for a blanket licence from PRS and PPL, in other words an agreed annual fee based on all sorts of things, like how many people they broadcast to and how many hours of music they play.

PRS represents composers and publishers.  PPL represents performers and record labels.  That’s (more or less) it.  Can you improve on this, whilst keeping it succinct?  Tell me!

Get behind this great project!

John Blaylock and Jote Osahn are setting up a choir in Manchester for those affected by homelessness.  The Lifeshare Choir is open to anyone, rehearsing once a week at Lifeshare, (Charter Street Ragged School 142 Dantzic Street Manchester, M4 4DN) to perform at various venues and events this Christmas. 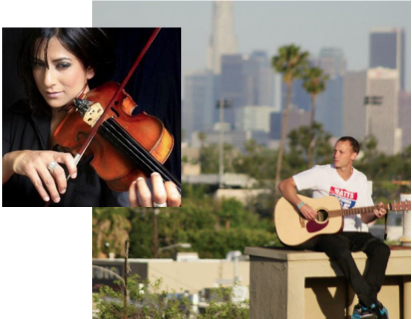 John and Jote are Manchester musicians, involved in loads of good stuff, including the community music projects of Brighter Sound, based at Band On The Wall.

“….One of the root causes of homelessness in Manchester is addiction. The body produces endorphins when we sing and these natural highs can encourage participants to feel more positive about themselves, re-connect them to other people and help them gain confidence and self-esteem. Our performances will also demonstrate to participants and audiences how some hard work and commitment can lead to a great sense of achievement and self worth.”

Music and a bit of social compassion?  What could be better.

I’m getting behind this project with some money from Realstrings and we already have the support of a high profile media composer, which gets the pot to £1000.  But we need to raise another £1000 to cover the costs of materials, facilities and the core hours of John and Jote.

Can you get behind it with a donation?  Message me and I’ll fill you in!

I’ve been meaning to do a show reel for most of that time. Done it now, some stuff old and new, not everything I wanted to include, gave myself a 5 mins max rule.

Midnight by Un-cut
Father by The Christians
Wrapped Up by Olly Murs
Army of Two by Olly Murs
Cada Vez by Guy Robyn
Ghost of a Chance by Fran Smith
Criminal by Lower Than Atlantis
Gerua by Dilwale
Holding onto Heaven by Foxes
Never Enough by Visage.

Like it or not,  most music is recorded to a click.  It’s a blessing and a curse.
The click locks us together but at times, can squeeze the very life out of music.

How about we get the click to follow the music for a change? That’s not a daft suggestion.  In most sequencers, you can make a tap-time tempo map.  Here’s how I do it in Logic.

I recorded a few bars of piano without a click, just trying to feel it and phrase it musically.  The timing is free, often called ‘rubato’.
If I want to sequence with this or play along, a click that matches the music would be really useful.

Step 1. Put the first beat of music on beat 1 bar 1, and roughly find the tempo for the first bar.
Step 2. Set up a midi track to tap along with the music from a midi keyboard. A percussion sound is best. (Turn the sequencer click off.)
Step 3. Choices; tap on every beat, or half bar or bar.  For this music, I tap on every half bar.
Step 4. In Logic, the tool you need now is well hidden.
Go to ‘view’ , ‘configure global tracks’ and tick ‘beat mapping’.
Step 5. In global tracks you now have a beat mapping option.  Select your tapped midi track, choose ’beats from region’, I tapped every half bar, go.

And that makes you a tempo map that follows the music, changing tempo on beats 1 and 3 in every bar of 4.  Most likely you will want to play around with some tempo changes to get the click feeling comfortable with the music, you might need some tempo changes on beats 2 and 4.  But now you can play along with your oh-so-natural feeling piano part, with a click and all the features of midi timing.